League of Legends is a place where players get to showcase their power in the flashiest ways possible. In a game where the most charismatic players stand out, some roles remain in the shadows doing the dirty work but staying out of the limelight. One of these roles just happens to be the Top Lane where players appear to not do much. Let’s break the stigma by introducing the best top laners in LoL esports history and what they did to earn their place.

The 10 Best Top Laners in LoL

When we talk about the 10 best top laners in League of Legends esports history, it’s important to mention that individual peak performance is counter more than the number of titles they won. League of Legends is a team game for sure, but there are always players that contribute more towards the success of the team even if they relied on a degree of team effort to achieve this. Peak performance and individual achievements are the biggest contributors to our best top laners list.

There are a lot of Top Laners in League of Legends that have accomplished so much in their careers. This role is perhaps one of the roles that have the shortest peak performance periods compared to other players that manage to stay relevant for more than 2 seasons. Because Top Laners are often stuck on tank duty, it’s difficult to showcase a player actually is when their best moments are surviving ganks. Regardless, some of these best top laners have career highlights that will surely convince even the harshest critics.

Kiin is probably the most underrated player in the world considering he’s one of the reasons why Afreeca Freecs is still considered a great team. This player is so essential to the organization that they even gave him his own Internet Cafe just to prevent him from signing with other organizations. Afreeca may not be the strongest teams in the world but that doesn’t mean that it doesn’t have one of the best Top Laners in League of Legends esports history.

Despite not having the best success internationally, Kiin continues to show that he is a competitor. Afreeca Freecs has a long way to go before they can stand up against teams in their own region let alone internationally. Players may come and go in AF but we’re certain that Kiin will stay for a long time. As mentioned, League of Legends is a team game so as much as teamplay is necessary to win a game, team mistakes can also lead to the failure of an organization.

Wunder is probably the best top laner to have ever played in Europe. The player has helped the team overcome a lot of difficult opponents by being the most responsive top laner in League of Legends history. G2 Esports strength lies in the fact that the team is able to work as a unit around the map and secure kills and objectives by constantly overwhelming the opponents with sheer numbers. As a top laner, it’s difficult to achieve such a feat since you’re so isolated from the rest of the team.

Teamplay isn’t the most impressive factor about Wunder. This player has consistently outperformed new waves of top laners in the EU and even establishing himself as the king of the top lane. When left alone, Wunder becomes a huge threat and is able to push any opponent back to their tower. He’s able to retain his spot as the best top laner in EU despite spending most of his time playing World of Warcraft.

Khan is an absolute beast of a top laner but is known for failing at the international stage. Khan has always been a part of superteams that have history of being successful but when it comes to the moment when performance matters the most, his entire team crumbles and they fall short of winning it all. Khan has won 5 LCK Titles in 4 different organizations (Longzhu Gaming, Kingzone DragonX, SK Telecom T1, and Damwon Gaming). He is always highlighted as a player that likes to carry instead of playing a facilitative role.

During Khan’s time at Longzhu Gaming, he was hailed as the best top laner in the world. He dominated a faltering T1 and managed to qualify for MSI 2018 before getting absolutely smashed by RNG at the finals. He continued to be one of the most sought after Top Laners as he managed to nab a deal with T1, FPX, and Damwon Kia. His team may have underperformed during the time they were together but he showed the world that he wasn’t the problem in.

Bin is probably the most surprising addition to this list. Bin is a player that likes to take things into his own hands and carry the game. He is a player that likes to outplay the competition and he does so with such mastery that you can’t help but admire his selfish style of playing League of Legnds. Fortunately, Bin can deliver on carry champions whether he’s behind or ahead since he understands the mechanics of the champions he plays on a deeper level.

Bin was known at worlds as a pretty selfish player that wanted to force his carry champions, refusing to play tanks. Although, he always managed to deliver an exemplary performance even though the enemy team would forcefully put him behind. He is extremely tilt-proof and can perform his duties even though he’s been ganked 200 times in lane. The highlight of this player is that he’s the only player in League of Legends esports history to score a Pentakill at the Worlds Grand Finals.

Looper is a player that most people probably don’t remember but he was an essential asset to the success of Samsung White at Worlds 2014 and to Royal Never Give Up throughout 2016. Like Wunder, he is the player who was originally called the King of Teleports because of his responsiveness in teamfights and proper positioning. He is able to execute flanks which win the game and can manage the frontline really well to prevent the team from getting overrun.

Despite being successful in 2014, the recent changes to League of Legends policy on having sister teams forced him to find opportunities elsewhere. He tried different organizations in 2015 but failed to find success in any of the places he went to until he moved to RNG in 2016 with former teammate Mata. He continued to be a top performing top laner but with the arrival of Smeb and other young top laners, he became left behind really quickly.

Smeb is probably the best top laner that has never won an international tournament. He has 2 regular-season MVPs to bolster his claim as one of the best in the world. He is famous for constantly outplaying 1v2 ganks and surviving under the turret as well as constantly stealing red buffs from the enemy jungler as Jayce. If you were a top lane, you didn’t want to engage a fight against Smeb 1v1 so you had to call in some help but even that won’t guarantee you success.

ROX Smeb managed to captivate the hearts of top laners everywhere but he was outperformed by a player that was simply better than him in every way. Smeb may have fallen short of taking home the title of being the best player in the world during 2015 but that doesn’t mean that he stopped being so dominant. For a team as talented as ROX Tigers, he managed to establish himself as one of the key members of the team.

Impact is considered to be the King of the Weak Side because he’s able to perform well and handle situations where he’s being threatened at the Top Lane. Top Laners are often being ganked because they’re easy prey especially if they use very vulnerable champions like tanks during the early game. Top Laners often just try to delay their deaths as long as possible to waste the enemy ganker’s time but Impact makes an art out of dancing around the enemy.

As one of the most valuable import players in North America, Impact has consistently been able to make it to the world stage. During his time in the region, he was known for the phrase “Top Die” because he was able to execute solo kills in the lane easily. Even though Impact is not as aggressive as he was 8 years ago, he is still able to keep up with the competition as a weak-side top laner. It is almost impossible to get a kill onto Impact without sacrificing another in return.

TheShy is an innovator in the top lane with a different playstyle and approach to the game. He prefers playing marksmen in the top lane but is able to use a lot of carries and tanks as well. TheShy was long feared as the strongest top laner in the world because of his dominance and confidence in executing illogical plays that turned out to be successful. To this day, the main strategy to beat Invictus Gaming is to constantly send 3 players to the top lane to shut him down before he gets too strong.

While it’s true that ThyShy is extremely inconsistent, he still manages to show that his peak is still present. The reason behind is incosistency, as explained FionnOnFire in his article on Upcomer, is because he thinks about strategies ahead of time that he thinks will work. Oftentimes, the strategies get shut down by the enemy so he ends up falling behind but it’s better than being a top laner whose only purpose is to survive being dove upon.

Nuguri is the top laner that helped Damwon Gaming secure the Worlds 2020 Championship. The 2020 Damwon Gaming roster was thought to have been invincible because of the raw skill that all 5 players have and the coordination that they exemplified in teamfights. Despite being in a superteam, Nuguri stood out as the person that could find impossible flanks and simply turn around teamfights from absolutely horrible ones to heavensent teamfights.

After joining FunPlus Phoenix, Nuguri quickly managed to prove to the world that he wasn’t simply carried by a superteam as he was quickly relieved from being a facilitative top laner into one that had more carry options. In Damwon Gaming, he mainly played tanks, enchanters, and some hard-engage champs like Kennen but had more agency to play hard-carry champions like Irelia in FPX to which there were no longer any doubts that he was the best Top Laner in his own right.

MaRin was a top laner that was on a whole different level. He was the only Top Laner in history that won the Finals MVP after winning Worlds which was quite the feat considering he was teamed up with the almighty Faker. He proved throughout the regular season and Worlds that he was the centerpiece of SK Telecom T1 as he steamrolled through the competition and carried the team to victory.

MaRin absolutely demolished the competition and that even included Smeb. He denied the other toplaners the chance to compete as he became the deciding factor in most of his games. Unfortunately, MaRin was severely overshadowed by less knowledgeable fans because he was on the same team as Faker which forced him to set out on his own path to glory outside his mid laner’s influence. 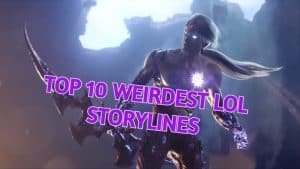