Basics in LoL you need to know

If you are new to online gaming and you are wondering what to choose, don’t second-guess yourself and trust the most popular game in the world, League of Legends. Published by Riot Games, the game claims over 100 million active users and have conquered the world of eSports. We’ve put together a little guide on the basics in LoL you need to know.

But don’t get overwhelmed, League of Legends is not your typical game. Most beginners get panic by receiving a huge amount of information that is too hard to handle. There are many things to look at and your first time playing the game won’t be easy.

And to give you an idea what you need to look forward to in the game, here are some of the things you need to know about League of Legends.

its main source of damage comes from casting spells or abilities.

has only the damaging abilities and moves around quickly using combo spells to gain kills.

their source of damage is auto attacks. They leave the most damage in the game, that is weak at the start but become stronger in the later part of the game.

does not deal damage but make the team stronger by giving more stats, healing, and use CC on their opponents.

Although there are lots of tutorial to this game, learning the concepts like what buttons do what, the abilities of players, and what items to shop and protect. This article will serve as a guide and introduction to new players. It can help them survive in their first game in the League of Legends.

Being the most popular game in the world, anyone wants to be pro in this game. It takes a lot of time and effort to be able to excel without losing the game. Although it is part of the game, if you take into consideration the information included in this article, you will have a bigger chance to win your first League of Legends battle.

TFT Set 7: Dragonlands Is Everything We Ever Wanted

Is Riot Games Planning to Make League of Legends NFTs? 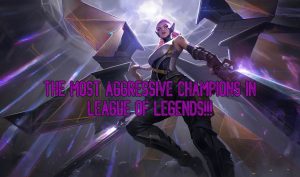 The Top 5 Most Aggressive Champions in League of Legends