Riot Game’s Valorant has taken the world by storm as the up and coming first-person shooter game to be an international success. Many streamers and professional FPS players from different games were invited to take part in the Valorant Beta testing phase but as of April 11, Closed Beta was offered to the public via a random drop chance. Luckily, we managed to snag one ourselves and now we get to show you our first impression on what seems to be the hottest game of Spring 2020.

Read also: What is Valorant?

Much like you’ve heard, Valorant is 80% CS:GO, 15% Overwatch/Apex Legends, and 5% original touch from Riot Games themselves. This means that there is a high priority on gunplay and only a small reliance on the use of skills and abilities. This is gives an advantage to people who have experience playing traditional FPS.

The greatest difference that Riot Games’ put when creating the game is that while there is an option to choose from 10 different agents, their character models all have the same hitboxes, movement, and health points. This means that regardless of who you play, that agent will never have the advantage in terms of character design.

How to Qualify for the Valorant Beta

Yes, you can still apply for the Valorant Beta even until now. In fact, with the success of the Valorant stream release reaching 1.7 million viewers, Riot Games has been the drop access even more accessible for those aspiring to get that Beta Key. All you need to do is follow these steps so that you can play this game yourself.

To create a Riot Games account, follow this link. A Riot Games account will make you eligible to play all of its game which includes League of Legends, Legends of Runeterra, and Teamfight Tactics on your phone. You must keep in mind that for this to work your account must be from a country that is part of the Beta program, however, you can always cheat this by using VPN to change your location to the US or EU.

Now that you’ve connected an eligible Riot Games account to your Twitch account, all you need to do is watch streams. You’ll need a minimum of 1 hour view time before you even get the chance to do it. Mind you, it took us 40 hours to get the drop ourselves so it might take some time. Also, remember only to watch streams with the [Drops Enabled] tag to qualify for the drop.

You’ll know if you qualified for the closed beta when you receive a notification from Twitch stating that you’ve received the drop. This can also come from the email you linked your account with. Once you get this notification, you’ll need to download the client which is a good 10 GB or so.

Read also: Valorant, will it become the next Fortnite?

After a while of playing and comparing it to previous FPS games which it is often compared with, it’s safe to say that Valorant has somewhat created an identity for itself through the mixing and mashing of the best element from each of the other FPS games. Needless to say, we’ll be sharing what we think about the elements surrounding this game.

There are 10 different agents in the Valorant Beta, each with a different set of abilities, unique personalities, and appearances. Despite this, the agents actually have no differences when it comes to hitboxes, movements, and health points which is something that is very prevalent in games like Overwatch and Apex Legends.

Each agent will have 1 default skill, 2 purchasable skills, and 1 ultimate skill. These skills are often used more for utility and strategy such as limiting movement, vision or creating space for your team. However, some agents do have lethal skills which might need a bit of tuning when the actual game comes out.

At the start of the game, you can choose one of these ten agents but your team can’t choose an agent another teammate has already chosen. Each comes with a role (Controller, Initiator, Duelist, and Sentinel) which you’d usually want to get one of each in a team but is not necessary since you’ll rely mostly on your gunplay.

There are three different maps in the Valorant Beta, it’s Bind (Middle Eastern style), Haven (East Asian Style), and Split (Futuristic Style). Much like other Team Battle maps, it’s separated into the Attacker Side and Defender side, where the Defender side will always have access to the Bomb Sites.

The maps also feature 2-3 different bomb sites usually found on opposites ends of the maps. They provide a lot of cover for strategic ops and skirmishes and make for a difficult attacking scenario. Each side will switch roles as Attacker/Defender on the 12th round.

What makes Valorant maps unique from CS:GO maps is that there are Teleporters found on each map where you can fast travel to a different part of the map. However, teleporters make a lot of noise which alerts the enemy that you have traveled. Another unique feature is that some terrain materials such as tall crates are only accessible by agents with specific abilities that give them a bit of an advantage.

If you’re a fan of real-life guns then you might be disappointed to learn that Valorant has a unique set of guns which are only loosely based on traditional guns. Unlike CS:GO (yes, we’re gonna keep comparing the two), Riot Games makes each gun relevant for its specific price point. This means that whatever gun you have, it’s going to be good depending on the situation at hand. Another neat thing is that you can’t buy grenades in this game as agent abilities already cover that.

Valorant also has a skin system where you can buy skins and decals for your guns and knife. Knowing Riot Games, this should be where most of the revenue will be received aside from the eventual Battle Pass which they may or may not introduce later on.

Economy is a very important of Team Battle FPS games as this is where part of your decision making will play a huge part. If you haven’t played a Team Battle FPS match before, Economy is basically your handling of money during matches since you only get a limited amount whenever you win or lose.

Valorant has perfected the need to manage your money well in order to introduce more decision making in the game. The game has also introduce a way for other players to ask for guns they want where other players may choose to buy it for them without directly asking in the chat. People who are new to this term might have a need to learn this mechanic altogether when starting out.

Winning or Losing a Round

An entire match contains up to 25 rounds where the first team to reach 13 round victories win the match. To win a round, there are 4 different ways to attain victory.

The user interface is made simplistic yet elegant but may need a bit of a graphics tweak when the actual game is released and has aged quite a bit. Riot Games has incorporated a majority of necessary elements to any team game such as pings and callouts. However, the ping system may need to be limited as it gets annoying when other players start pinging uncontrollably.

The lobby is very similar to that of the lobby in League of Legends as tabs such as the shop, profile, and match history are all on the upper side of the UI and your Friend’s List is on the Right side. On the center, you’ll find news and promos from the game itself.

If you’ve played any online game before, your familiar with anti-cheats and their relevance to any MMO games out there. For FPS games specifically, this gets rid of cheating software such as aim-assists and wall hacks. For some, this might prove to be a source of relief especially if you’re tired of all the cheaters going around ruining the fun.

On the other hand, some players heavily criticize the existence of a rootkit anti-cheat software as it supposedly allows for an easier way for hackers to access your system. People are especially wary of Tencent being a major contributor to Riot Games products for some reasons you might already be aware of. Another concern is that during the beta, a hacker broke the community making us question how effective Riot’s anti-cheat system actually is.

Read also: A Deeper Look into Up and Coming Projects

For everyone who has been lucky enough to participate in the Valorant Beta, Riot Games is rewarding them with exclusive prizes such as player cards, titles, and gun accessories that prove they were there when the closed beta launched. While it’s not anything gamebreaking, it will be great to show off that you were one of the pioneers who tried out Valorant for the very first time especially if you plan on playing for years to follow.

The Valorant Beta has allowed us to have a refreshing take on Team Battle FPS games that you won’t seem is there when you look at the Valorant on its face value. Needless to say, it was extremely enjoyable and allowed veteran FPS players to really shine separating them from non-FPS players. Each match gives you a very contenting end result that keeps you hooked on hours at a time. You’ll only need to play it to know what we mean.

And, no, it’s not just a cheap knockoff of already popular FPS games which have made names for themselves as Valorant incorporated all the best elements from each of those games to create something new. If you’re a hardcore fan of CS:GO and think this way, all the more reason for you to try it out as even just 1 game will sure make you change your mind. After all, if prominent players such as Shroud claim that this game is great, how can you even argue at all?

As much as we loved our initial play through in the game, it’s needless to say that Closed Betas are meant to find anything that needs improvement in the game, to which there were definitely a handful of them present. There were several reported abusable bugs in the game as well as annoying glitches that would ruin the experience but as of now, the Valorant Development Team has continually kept in touch with the player’s reports and will continue to fix any problems in the game.

The game can only literally become better from here on out. With a large company like Riot Games, the team behind Valorant is more than capable of bringing new things to the table the same way they did with League of Legends. Of course, we’ll be seeing new maps and agents, probably even new gamemodes in Valorant which will keep us interested for years or even decades to come.

Riot Games is a company that has always strived for the biggest esports events as you know from League of Legends. We’re confident that Valorant will be the same. By the end of 2020 or in early 2021 you can expect massive Valorant competitions taking place around the world, hopefully, even in your region and become a place where new names will rise and dominate the competition.

How to Play Against LoL Lane Counters During the Laning Phase 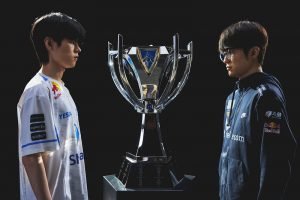